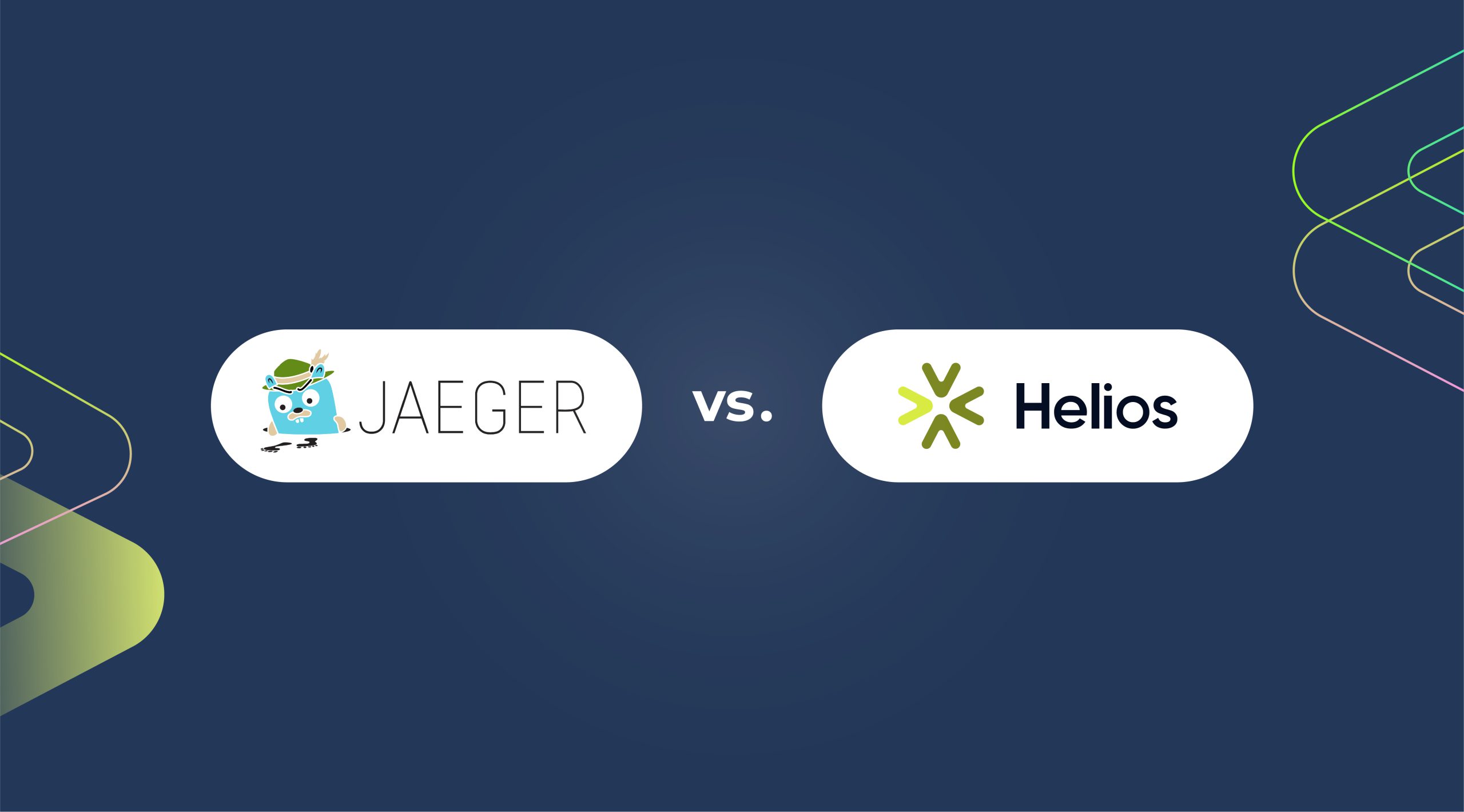 OpenTelemetry (OTel), is an open source, CNCF (Cloud Native Computing Foundation) project that provides tools, APIs and SDKs for observability data collection (i.e, logs, metrics and traces) from cloud-native applications. Developers can use the data collected from OTel to monitor and analyze application health and performance. To leverage the data and its insights, you can export the data to external solutions, like APMs, open source Jaeger and Zipkin, Helios, and others.

In this blog post we’ll look at two of these solutions, Jaeger and our very own Helios, compare them and see how they can be used together for troubleshooting your microservices applications.

Jaeger is an open source distributed tracing solution that’s become a go-to backend solution for OpenTelemetry. Originally, it deployed an agent on every host, aggregated the data locally and sent it to a collector component to be stored in a database. Today, it is part of the OpenTelemetry ecosystem and can receive data from OTel (either directly from the client-side or through the collector) . Users can query the data and view the results in the Jaeger UI. Jaeger was created by Uber in 2015 and is now a graduated CNCF project. 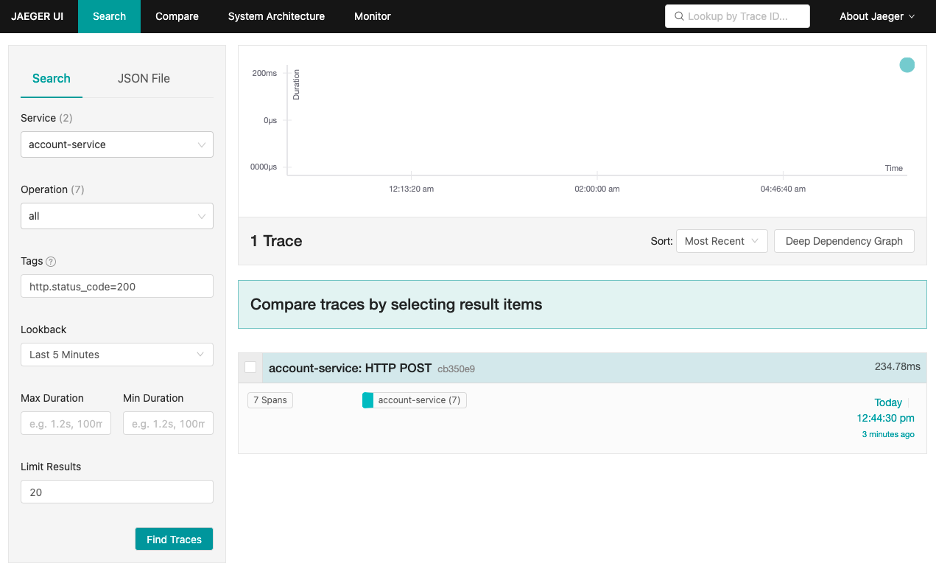 As can be seen in the screenshot above, Jaeger UI provides basic search and filtering capabilities – it’s possible to filter for spans by their service, operations, attributes (based on OpenTelemetry’s semantic conventions), timeframe and duration. For each trace, Jaeger provides a timeline view, similar to the ones provided by virtually any observability product:

It’s also possible to get a basic trace graph view:

Other views include a span list, trace statistics and a raw JSON mode. Additional advanced features include a trace comparison view and a system architecture view.

Getting Started with Jaeger and OpenTelemetery

The easiest way to get started with Jaeger and get a taste of its capabilities is by using its all-in-one Docker image – which was built exactly for this purpose. The Docker image combines all of Jaeger components:

You can start sending traces to Jaeger from an OpenTelemetry SDK using two ways:

1. Report data directly to the Jaeger collector – in this case, you’re “skipping” the OTEL collector and sending the traces directly to Jaeger. To do that, configure your tracer provider to export data in the Jaeger format. In Node.js, for example, it’s done this way:

2. Export data from the OTEL collector – assuming you already have a collector, configuring it to export data to Jaeger can be done by adding the following configuration to the collectors config.yaml:

Define a Jaeger exporter under “exporters”:

Add the exporter to the the traces pipeline:

Helios is a microservices troubleshooting and testing solution that is based on OpenTelemetry’s distributed tracing. Helios leverages tracing data to provide complete visualization of microservices, messaging systems, data pipelines and databases. Together with actionable data insights that Helios provides, developers can use Helios find and fix issues before production.

While Helios and Jaeger might seem to possess similar capabilities, there are differences between them. Jaeger is an excellent open source tool. Helios adds additional layers of features and capabilities that provide more information to developers for troubleshooting and testing. These include:

Visualizing your system enables seeing into complex sync and async workflows, understanding the dependencies between different components and detecting changes across versions. This visibility is key to troubleshooting your applications.

Jaeger provides a trace visualization view, but it is limited to a timeline view that gets cumbersome for large, complex traces.

In Helios, on the other hand, the same information will look like this:

As you can see, a quick glance at the Helios UI is enough to understand the architecture and identify workflows and dependencies. A simple drill-down provides information into issues and errors. Developers can quickly realize the problem and proceed to fixing it.

An API catalog provides developers with a full dynamic view of all their APIs – both public and private. It enables developers to understand the structure of their system and to drill down into the behavior of specific APIs. Helios provides a full sync and async API catalog, including HTTP, gRPC, GraphQL, Kafka, RabbitMQ, and serverless APIs. Jaeger does not provide this view into the system. 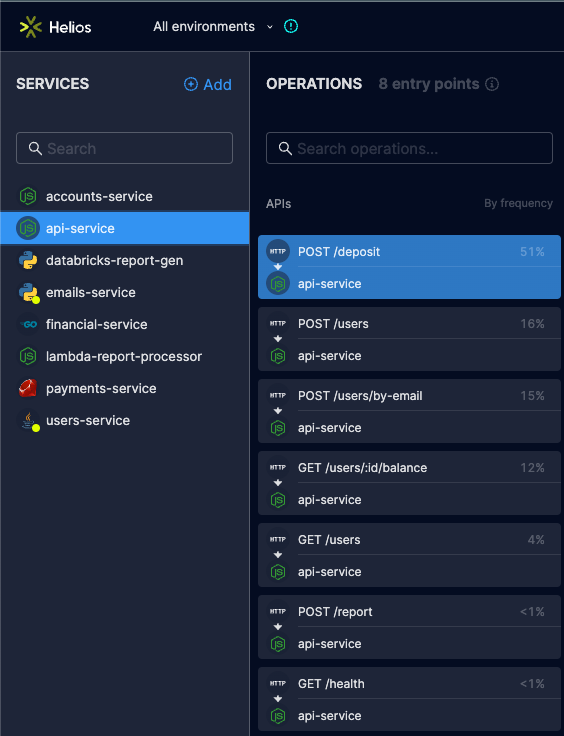 Testing is an important stage in the development lifecycle, as it helps prevent regressions and bugs before production and saves valuable time. Writing the tests can be time-consuming, especially in distributed environments.

Jaeger, on the other hand, does not provide testing capabilities and requires developers to complement Jaeger with testing on their own.

Replaying API calls in distributed applications can help reproduce issues to identify functional and performance issues. After fixing a problem in a feature, reproducing it helps ensure that the update version will work, error-free. But reproducing calls is not easy – it requires finding the endpoints, collecting the relevant payloads, setting up the services, and more.

Helios provides flow replaying capabilities that can replay requests to API endpoints, message queues, Lambda functions, and more. The flow can be triggered as a script, a cURL command or Postman request. Read more here.

When using Jaeger, developers are required to replay solutions on their own, either by building them manually or finding another solution to do it for them.

If you’re already using Jaeger, you can connect it to Helios through your OpenTelemetry collector. Additionally, Jaeger’s timeline view is included in Helios’ trace visualization. It’s easy to switch between the trace graph and the timeline. This will enable you to keep using Jaeger and leverage the additional capabilities that Helios provides.

Get started with Helios for free.