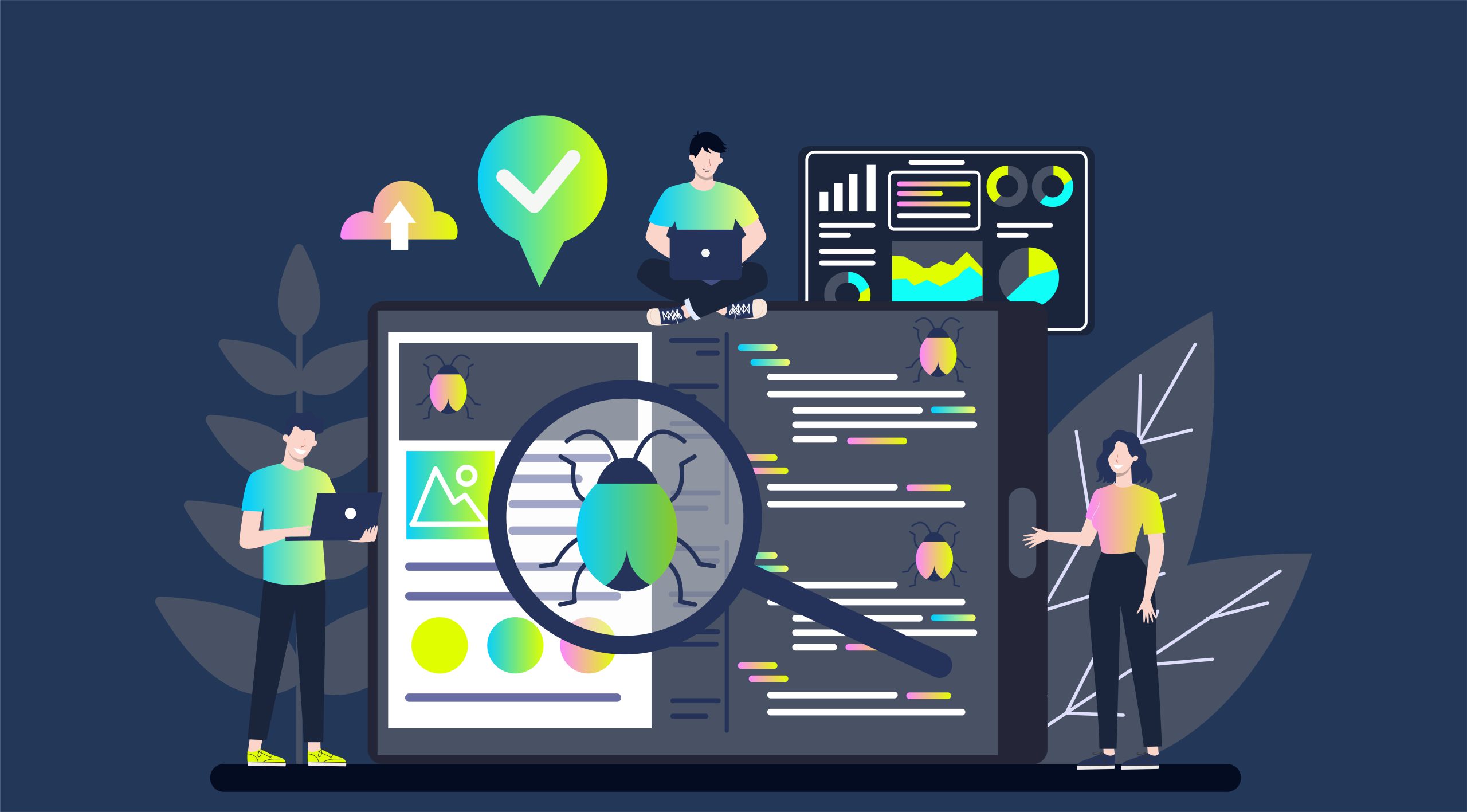 As engineering organizations transitioned from monolith to microservices architectures, they sought to make their development efforts more scalable and manageable. The microservices paradigm promised to increase development speed and improve quality, while cutting down on maintenance costs. However, in real life, there are inherent quality caveats when it comes to developing in microservices. One of the main issues is testing. Microservices are much more difficult and complex to test than monolith architectures. This is especially true when attempting to replicate traditional testing methods to microservices. Unlike a monolith, the microservices architecture is made up of separate services that communicate with each other. While they function in production as related units, they are developed as independent units in different teams.

So while service A depends on services B – E when in production, this is often not reflected in the testing environment. If a developer runs traditional test methods for component A, the testing environment will not always include the up-to-date versions of services B – E, but perhaps older or incomplete versions of them (i.e., a mock). Which means service A isn’t being accurately tested for real-life, production behavior, and changes that are made to it might cause an unexpected downstream behavior.

We believe that in order to minimize bugs in production and increase developer velocity and confidence, microservices testing has to evolve and become more reliable.

Helios is a developer platform designed specifically for testing and troubleshooting microservices. By leveraging distributed tracing, Helios provides granular visibility into the entire microservices architecture and into each service. This data is then used by Helios to automate the creation of microservices tests and to provide insights into specific failures and bottlenecks.

By using Helios, developers can go back to relying on testing as an essential and trustworthy step for delivering production-ready code.

Let’s see how it works.

Take a look at a typical testing scenario. Say we’re building a financial system that allows people to transfer money to each other, like PayPal or Venmo. A typical architecture includes the following components:

In our scenario, the API service exposes a “/deposit” endpoint, which receives the receiving user’s email, currency, and amount. Say we’re tasked with adding a test that verifies a new capability – whenever a successful API call to “/deposit” is made, the email service should send an email to the receiving user, stating that a transaction to his/her accounts has been made successfully.

While this is a typical scenario, it’s not that easy to test with traditional testing methods that were designed for different needs. Challenges include:

Helios enables the automated creation of this testing scenario while skipping over the hurdles a developer would have to figure out manually when testing with legacy solutions.

Step 1: Create a “setup action” for creating a user

Click on “Add as setup action”, and customize it. Helios supports parameterizing any parameters of the HTTP request by using the {{$var_name}} syntax. In the image below, you can see that two variables are defined: hostname and userEmail. Their value is defined globally and can be easily replaced. 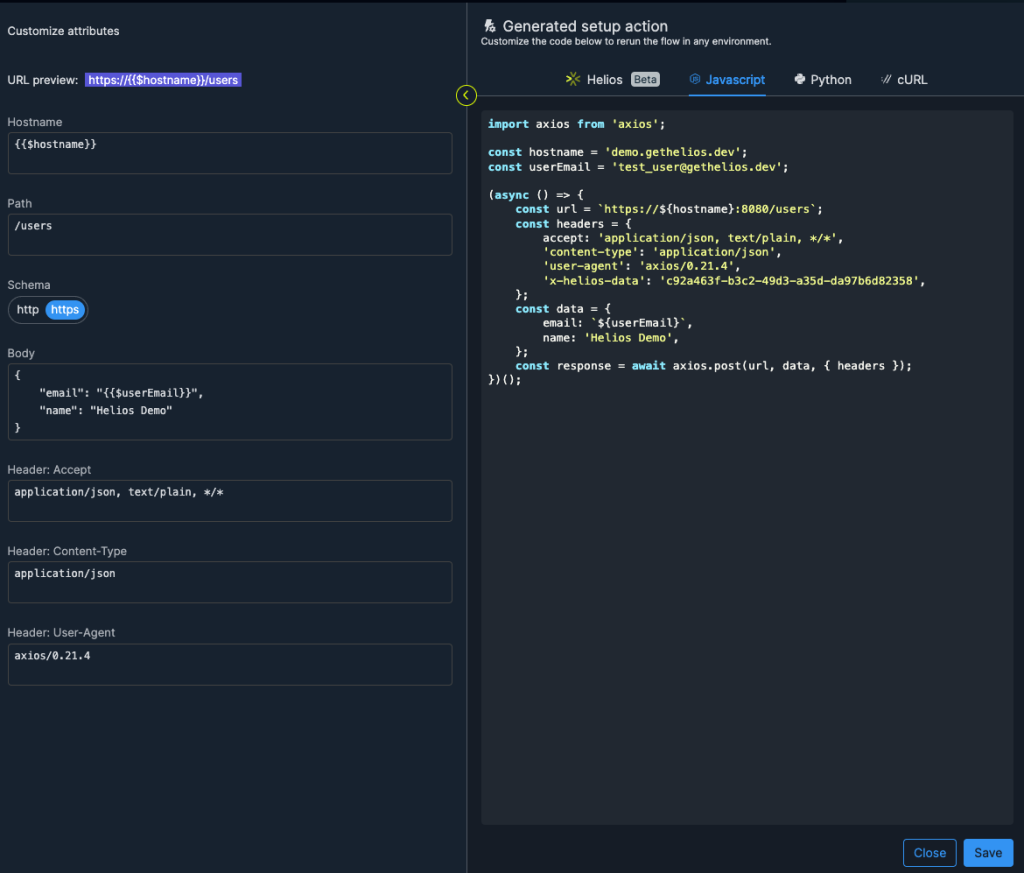 Create an E2E test from the “/deposit” endpoint:

Afterwards, add the “Create user” setup action to the “/deposit” E2E test by adding it in the left pane menu: 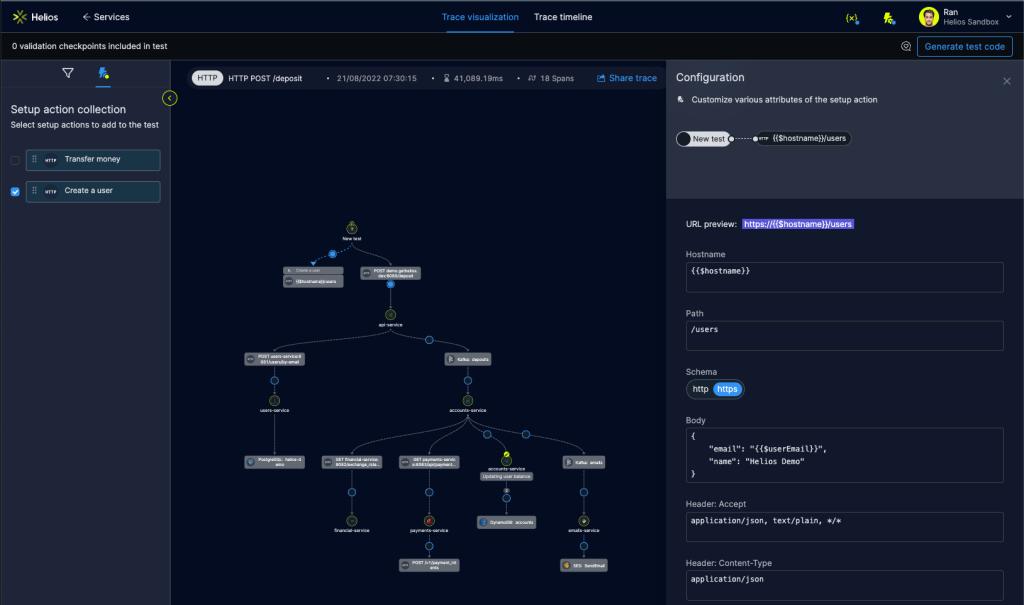 You can see that a “setup action” node was added to the graph. After clicking on it, the right pane menu contains the setup action’s config that we just created.

Let’s click on the “/deposit” request edge and customize it – we need to apply the hostname and userEmail variables, to make sure they are correlated with the setup action:

We can now generate the test code and see that all the variables are correlated: 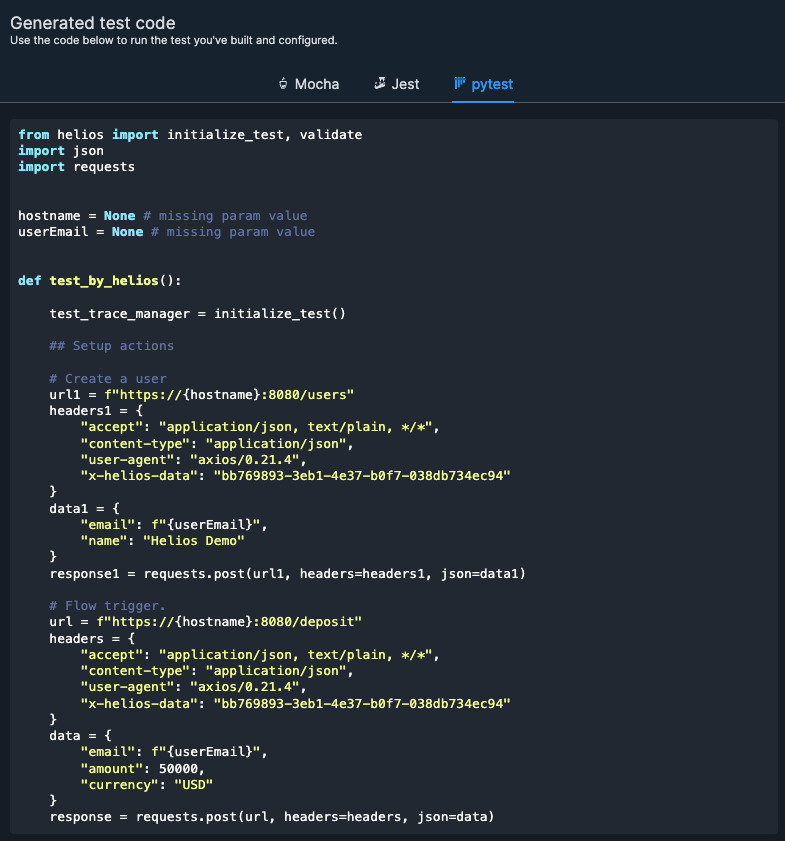 Remember that we wanted to validate that an email was indeed sent from the emails service? We simply need to select the SES operation in the graph and configure the validation accordingly. Notice that we’re using the userEmail variable here as well. 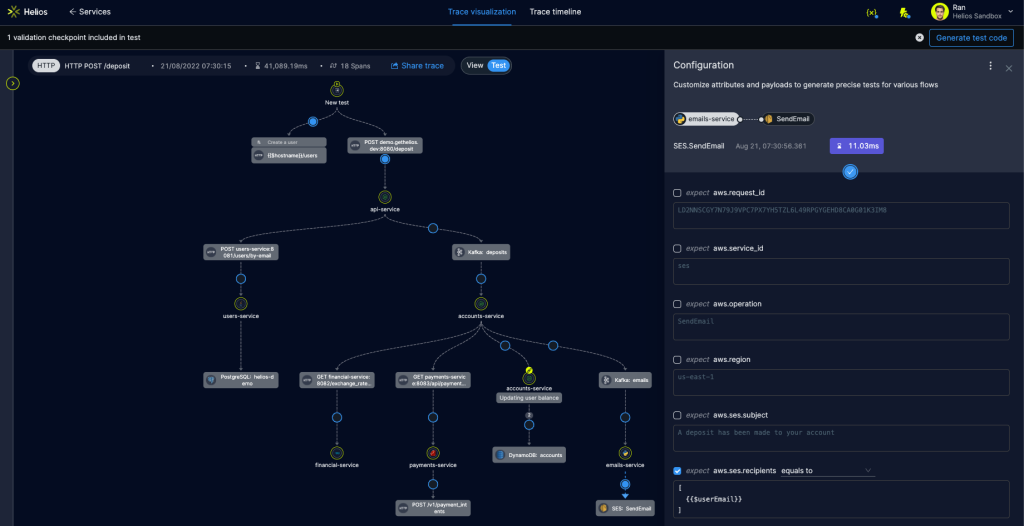 During the test, Helios also collects all the payloads automatically and regenerates the same API calls, including parameterization.

To use dynamic variables, simply go the the response of the setup action, select the “custom” validation and extract the variable: 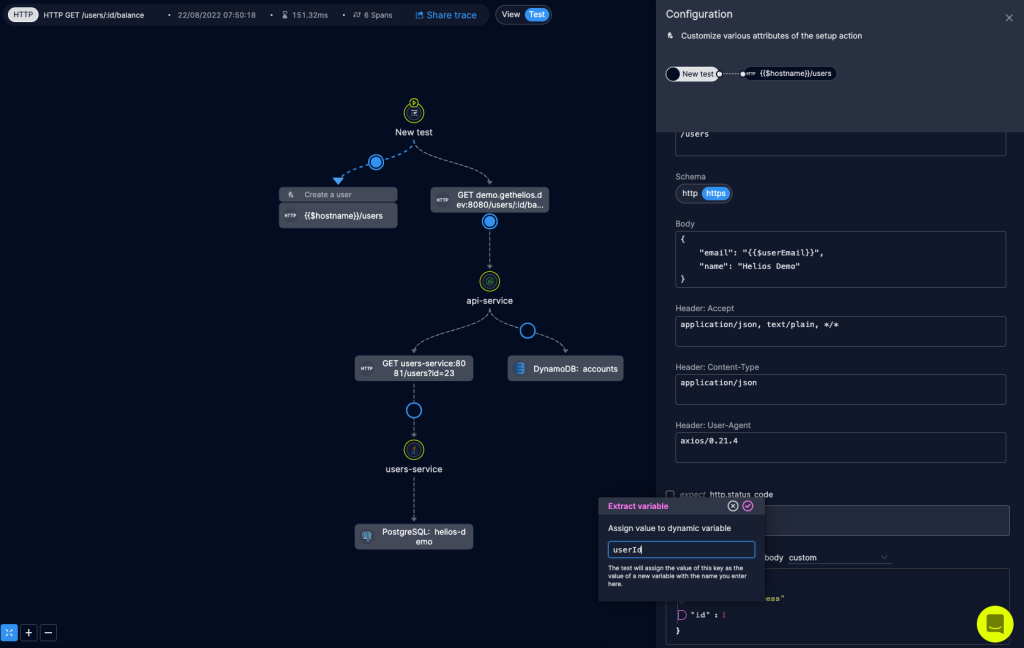 Then, you can use this variable anywhere you like; in the case below, as part of the URL that queries the user’s balance: 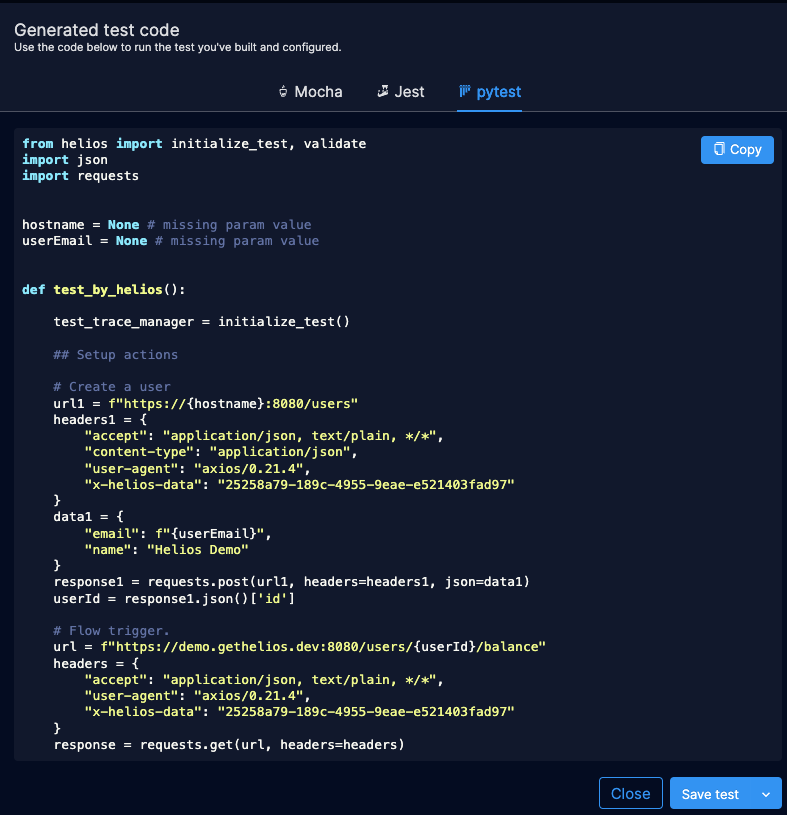 Ready to get started with your own testing scenario? Automate your microservices tests for free with Helios.